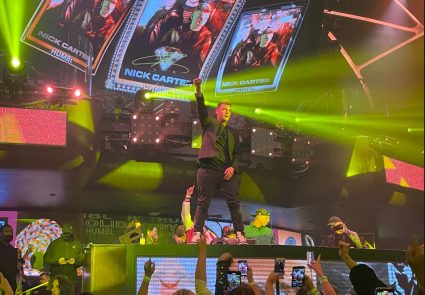 I told you guys I’d be doing an updated solo post after the listening party and I absolutely meant it. I’m sorry it got delayed but you know, the holidays and real life got in the way. Now, if you want the full breakdown with every detail about the album that we know so far, go here cause that has the possible tracklist, the producers he’s worked with, and an active timeline. This is more about the songs themselves after hearing them in person and seeing Nick even sing bits of it.

Say what you want about crypto, as I still am begging Nick to give me a “Crypto Course For Dummies” at this point but damn does it have Nick fired up. And a passionate Nick is a Nick that wants to create. He’s excited about this project in a way I haven’t seen in ages when it comes to anything remotely solo. So I suppose we can thank crypto-currency for that? That and it gave me a zombie song from my favorite singer so that alone has me going ‘Yay Crypto’…sort of.

For those who have been living under a rock, Nick plans to release this album as an NFT through Humbl, a form of crypto-currency. And from what I understand (which admittedly isn’t a lot) it serves as part of a blockchain so you can see directly who bought it and when they sell it and I think if you sold it, he gets royalties from that too. The artist gets more control of their work rather than the labels when you do it this way. That’s the gist of it, basically. And honestly I do see why rhat’d be more appealing to musicians. Apparently there’s talks of trying to have crypto companies sell their own tickets to shows or events (Humbl did this one, for example) and anything that wants to try and oust Ticketmaster’s bullshit is a win.

But anyway, Nick played a few songs for us. He was pretty happy during the event. It was low key but that sort of thing makes a night like this more special. As always he was great to the fans, happy and appreciative for the support. But really when Nick creates and gets to display that, it’s always something to behold. Because he’s so passionate. Some of the songs he played that night he’s teased before and others he hadn’t at all or played at weird times without letting the Instagram story save. So let’s start out with Spotlight. I’ve been posting my videos over on TikTok cause it seemed like the best way to get them out.

Spotlight part 2. I think this is my favorite of the new songs coming from @nickcarter. #NickCarter #BackstreetBoys #JBLGreekOut #millennials #fypシ

This kind of talks about the fact that Nick’s grown up in the spotlight but sometimes there’s others that want to be in it more than he does. Which I do like. I’m surprised Nick isn’t pushing for this to be his first single. I’d expected it to be. That said, I do tend be wrong about single choice decisions like…all the time. I do say try and listen to the lyrics. I tried not to make too much noise while recording so you guys could really hear it.

Speaking of the single…Nick’s choice was Easy.

Easy is basically about Lauren and his family. I do love that with this album he does seem to be getting more personal. And I know for many, personal means angsty songs but I’ve always disagreed with that. Personal or deep doesn’t always have to be miserable. Nick’s in a really good and happy place in his life, I think that’s pretty obvious for all of us. So his songs reflect that. I used to never think I needed a country version of Nick musically but really he’s so versatile that he can pull any of it off.

In the lines of Easy at least when it comes to what the song is about, we have Bonita. Genre wise, they’re pretty different but Bonita is about Lauren. And yes, you can go awww here.

Let’s talk about my other personal favorite of the bunch – Cooked Food. Man, this song is so different from any of Nick’s other solo songs that I just need the full version of it in my life. I’ve enjoyed it ever since Nick started previewing it on Instagram without any real lyrics set to it. This song is sexy, this song is funky and you just have to move to it. Even if you’re like me and have no dancing abilities whatsoever.

And as Nick said, it’s a metaphor…though my friend Lori puts it best.

I think Nick’s the most excited about Good Times which features Bizzy from Bone Thugs N’ Harmony, who he’s been a fanboy of for literally decades at this point. But it’s also something very different for him. Vic “BillboardKIller” Martin has told me whe wants to push Nick out of his comfort zone, he wants to give Nick not his best album but the best album. So thank you Jim Jonsin for getting the two to meet, because it seems like that’s what we’re getting here.

BoyBand Song was probably the most surprising for me, which is why I’m talking about it last of the songs he previewed. This song wasn’t exactly what I expected it to be about? But I kind of love it. It plays with the fact that obviously Nick is one of the biggest boybanders in history. It also lends itself to be one of those baby-making songs. Like, he wants to make love to you like a boyband song. I can absolutely get behind that. I think we all can. And Nick jokes about the song itself but really, the vocals are great, the melody is smooth and I’m a sucker for a tune that doesn’t take itself too seriously.

What I learned at this event is that Nick is more excited for this project that he’s been for awhile. Maybe it’s because BSB are on hold for the moment. Maybe it’s because covid has put the entire world through a loop. Hey, it could be because of freaking crypto. I don’t think it matters. It’s looking like this new EP that he says will be about ten songs, will be something special give all the passion he’s put into it.

And I can’t wait.

I'm in my thirties and enjoy being a random panda. I also happen to have a semi-healthy love for the Backstreet Boys and Zombies. View all posts by Rose

Nick Related Places To Be!